Mirjam Kühne, RIPE Chair, welcomed all participants and noted that they had a new RIPE Code of Conduct in place for this meeting. She also mentioned that a new revised PDP Document had been shared on the ripe-list, and that the RIPE Database Requirements Task Force had published its final report. Mirjam also thanked outgoing NRO NC member Nurani Nimpuno for her hard work.

Giovane Moura presented on responsible disclosure of bugs, while Alexandre Ferrieux gave an overview of a troubleshooting methodology they had developed for QUIC.

The plenary sessions saw presentations from Dr. Corinne Cath who presented her PhD research on the IETF’s culture in Internet governance, Sheikh MD Seum who shared his work on providing affordable Internet in Bangladesh, and Michael Oghia who advocated for better sustainability practices in the ICT industry.

Alexander Isavnin gave an update on Russian regulatory practices that are intended to ensure the nation’s Internet sovereignty.

The afternoon plenary sessions continued with Clemens Mosig, who presented a joint research project that raised the question of whether there was a need for new BGP Route Flap Dampening configurations. He was followed by Emile Aben, who measured latency into networks using the geographical data of RIPE Atlas probes.

After a well-deserved stretch break, Andra Lutu presented insights from an analysis on operating an IP Exchange Provider. She presented signalling data sets, traffic patterns and international mobility patterns. Max Franke was up next with a talk on new ways to use Happy Eyeballs for load balancing. Finally, Randy Bush presented on the downsides of dropping Invalids when running BGP Route Origin Validation and offered three solutions to this problem.

The day ended with the Time to Talk social event where attendees could meet with key RIPE community members and the RIPE NCC Executive Board on SpatialChat.

If you missed any sessions – the recordings and presentations are available online. 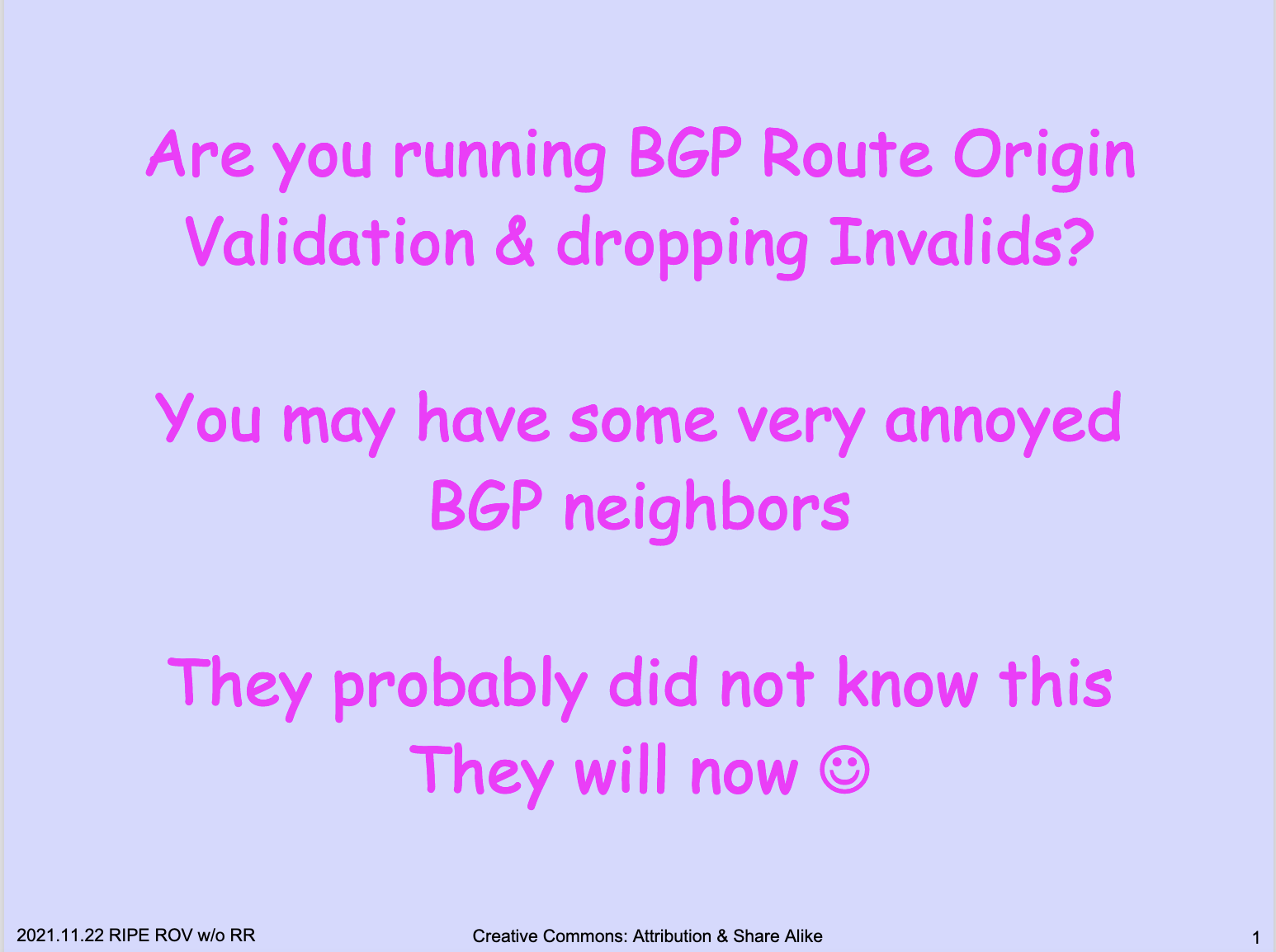 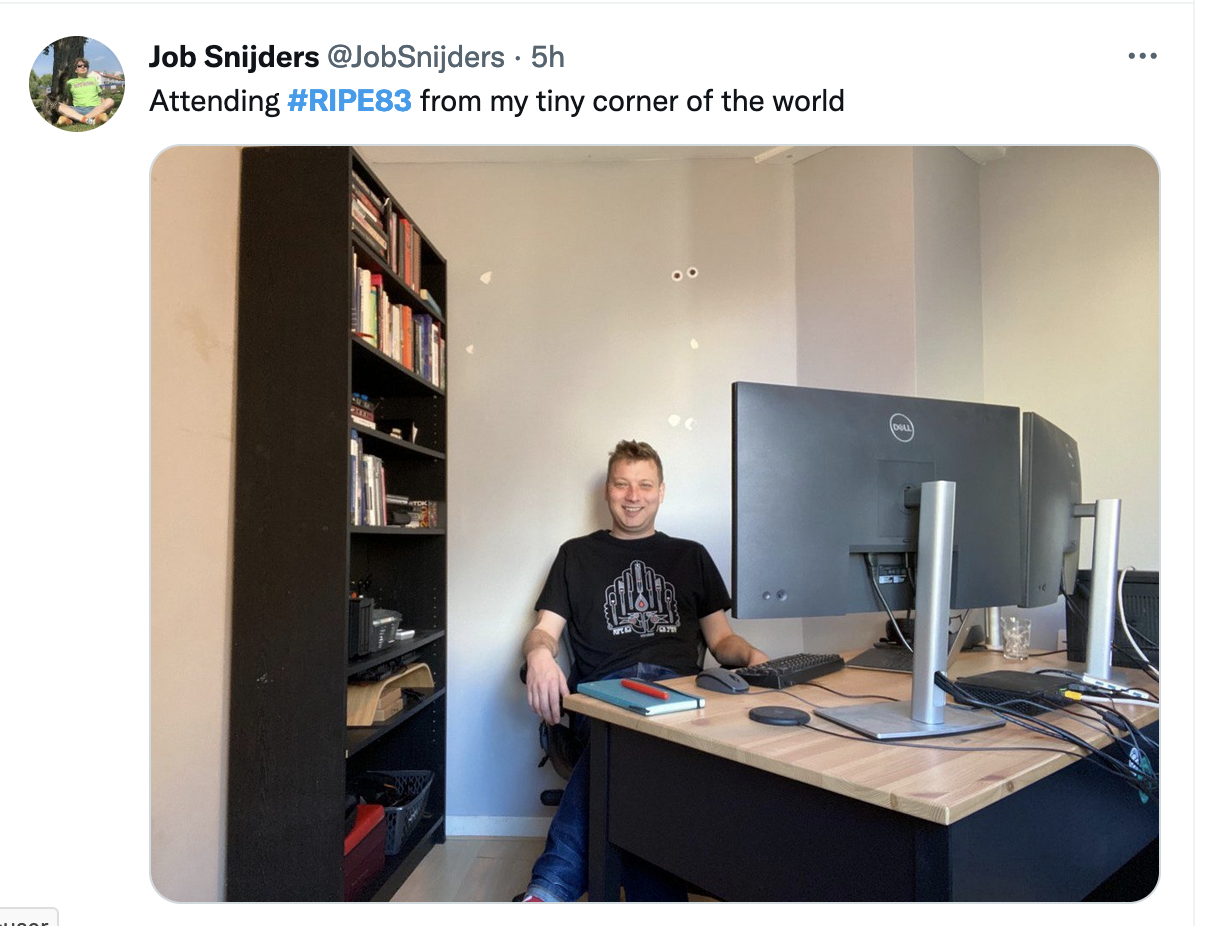 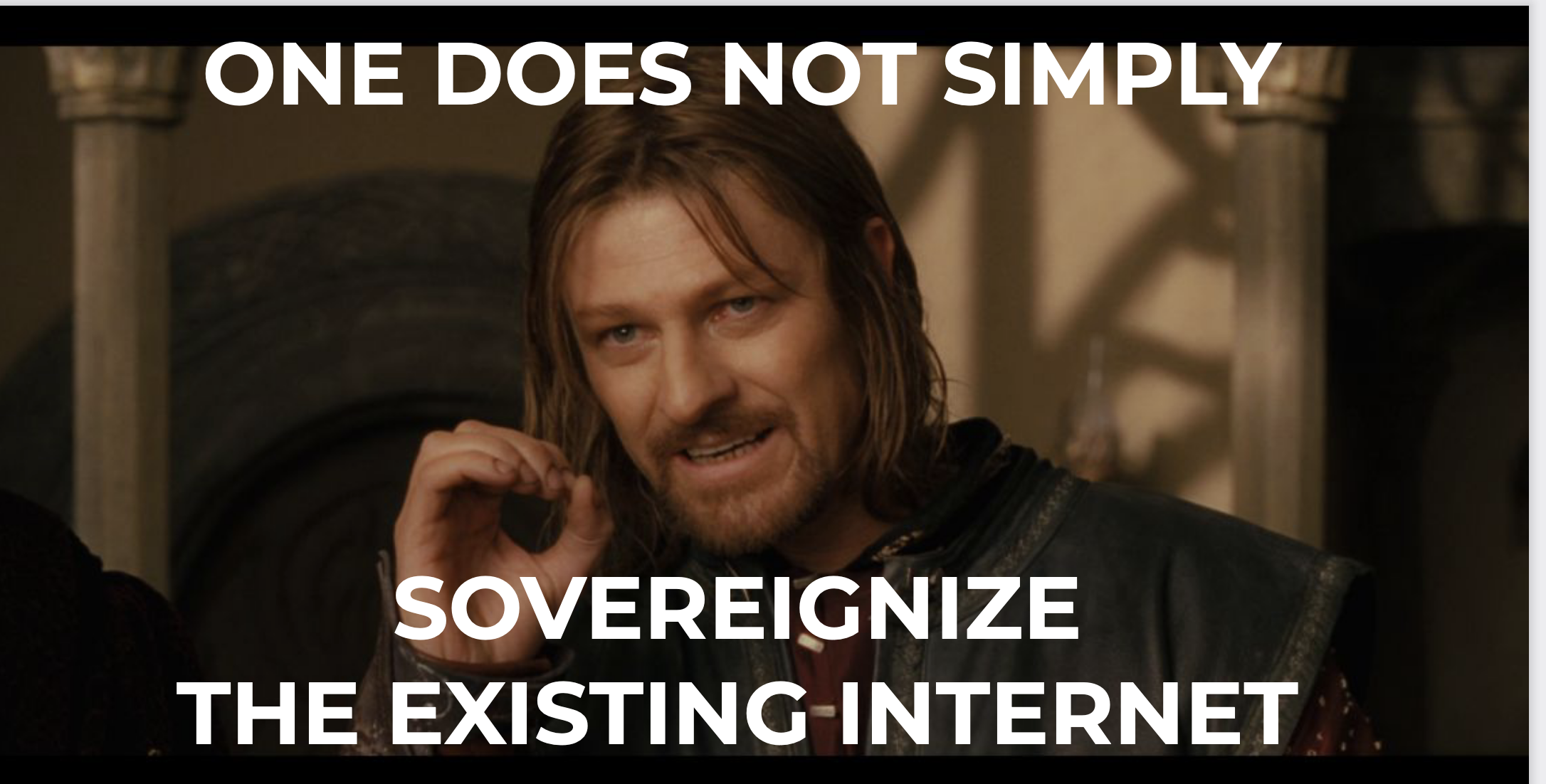 On the second day of RIPE 83, we welcomed 1,085 registered participants to the RIPE Working Group (WG) sessions. We also held a BoF session on technical training at the RIPE NCC where community members got to share their feedback.

The day kicked off with the Address Policy Working Group session. Hervé Clement explained what the ASO AC is up to. Following up on this, Ulka Athale (RIPE NCC) presented the candidates for the upcoming NRO NC elections. Next, Angela Dall’Ara gave an overview of new RIPE policies as well as policy discussions in other RIRs. Hans Petter Holen (RIPE NCC) provided an update on the AFRINIC case.

Marco Schmidt (RIPE NCC) offered a Q&A about the RIPE NCC Registry Services. James Kennedy of the ASO AC also got everyone up to speed on the RIPE Database Requirements TF. After a short break, Leo Vegoda went over current RIPE IPv6 policy goals.

In the Routing Working Group, Pavlos Sermpezis (Aristotle University) presented DataLabs’ research estimating the impact of an ongoing routing hijack. He shared best practices for measuring a hijack and mentioned some of the problems with public Internet measurements. Next, Ties de Kock (RIPE NCC) gave an update on the RIPE NCC’s quarterly plans for RPKI. Martin Hutchinson (Google) presented on certificate transparency and shared a framework that community members can use to design similar systems. Last but not least, Pim van Pelt shared his experience while renumbering his Autonomous System (AS).

At the IoT Working Group session, Elsa Turcios Rodriguez presented on a research collaboration with an ISP that looked at user compliance and remediation after IoT malware notifications. The researchers looked at three groups: consumers in a walled garden, users notified by email and a control group. She noted that in the walled garden group, 92% of the issues were cleaned up, versus 82% in the email group. And if the user’s device was infected with competing malware, this reduced the probability of remediation by 54%.

The next presentation came from Marco Hogewoning, who provided an update on legislative and political developments that affect the IoT space. He spoke about recent EU legislation and considered what role the RIPE community could play in potentially steering alignment and best practices as many countries seek international standards on IoT matters.

This segued nicely into the next session with the Cooperation Working Group, which saw a lively discussion on Internet governance. The chairs noted the ongoing Working Group co-chair selection and invited nominees for the role. Chris Buckridge (RIPE NCC) explored the value of principles for the RIPE community and for Internet governance generally. He produced a preliminary outline of suggestions for what principles define the community.

Next, Suzanne Taylor (RIPE NCC) explained what’s happening with NIS 2 and the implications it may have for operators of root name servers. She explained what her team is doing to influence policy in this area and shared their success with persuading the EU Parliament to exclude root name servers from their legislation. In the final talk of the session, Anriette Esterhuysen (UN Internet Governance Forum Multistakeholder Advisory Group) gave an update on the IGF ahead of its upcoming meeting in December. She explained the purpose and goals of the IGF and some of its upcoming plans.

The day concluded with a BoF session on the future of technical training with Evelien Schilder, Pedro Vaz, Gerardo Viviers and William Johnson (RIPE NCC). They spoke about the training goals of the Learning and Development department at RIPE NCC and invited feedback from the community on what types of training they would be interested in going forward. The audience shared their experiences and their suggestions for the training team.

Please note that there will not be a PC vote at this RIPE Meeting. As there were only two candidates, the PC will instead confirm the names on Friday morning.

If you missed any of today’s sessions, the recordings and presentations are available online.

Our favourite messages (and slides) of the day: 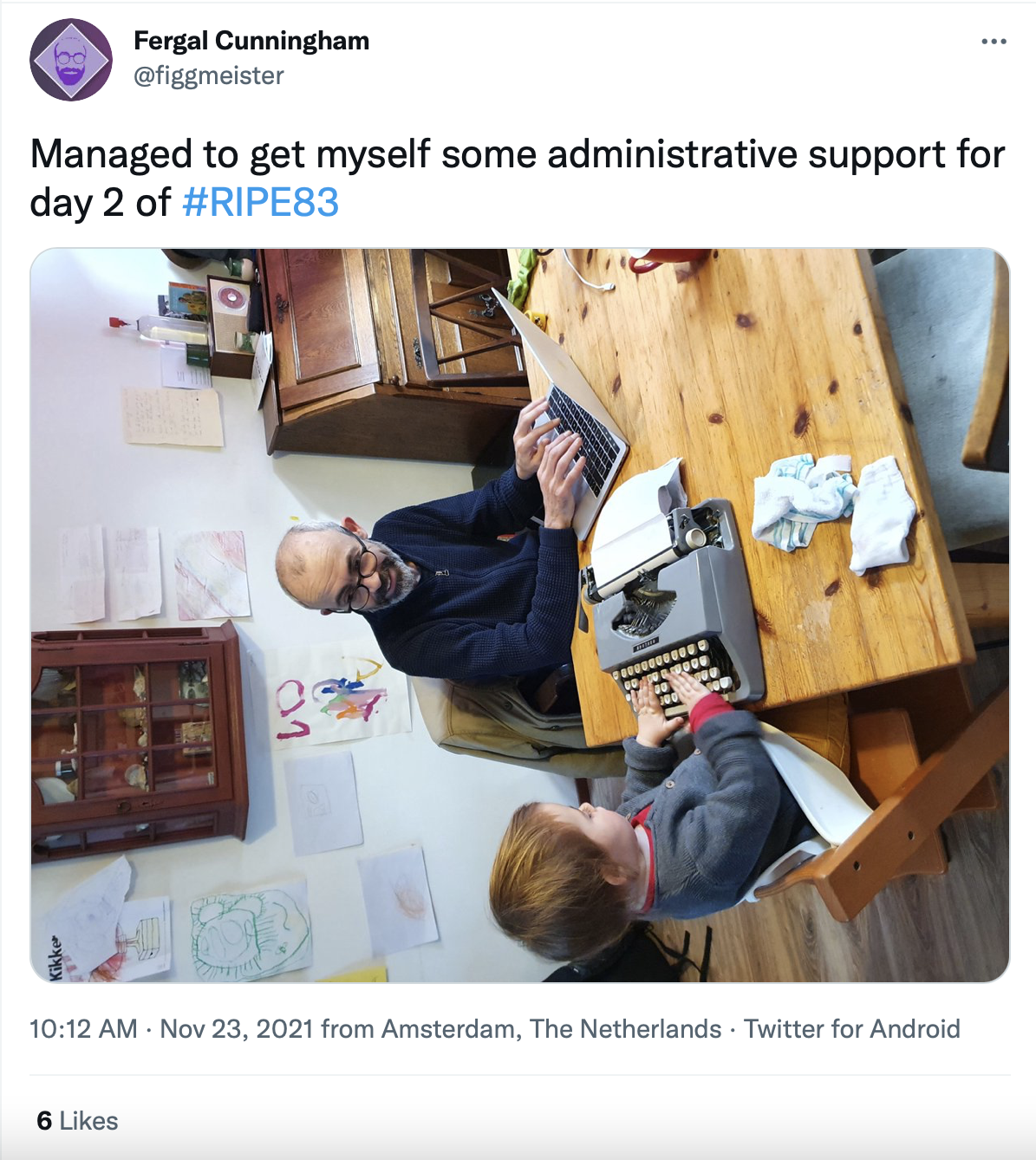 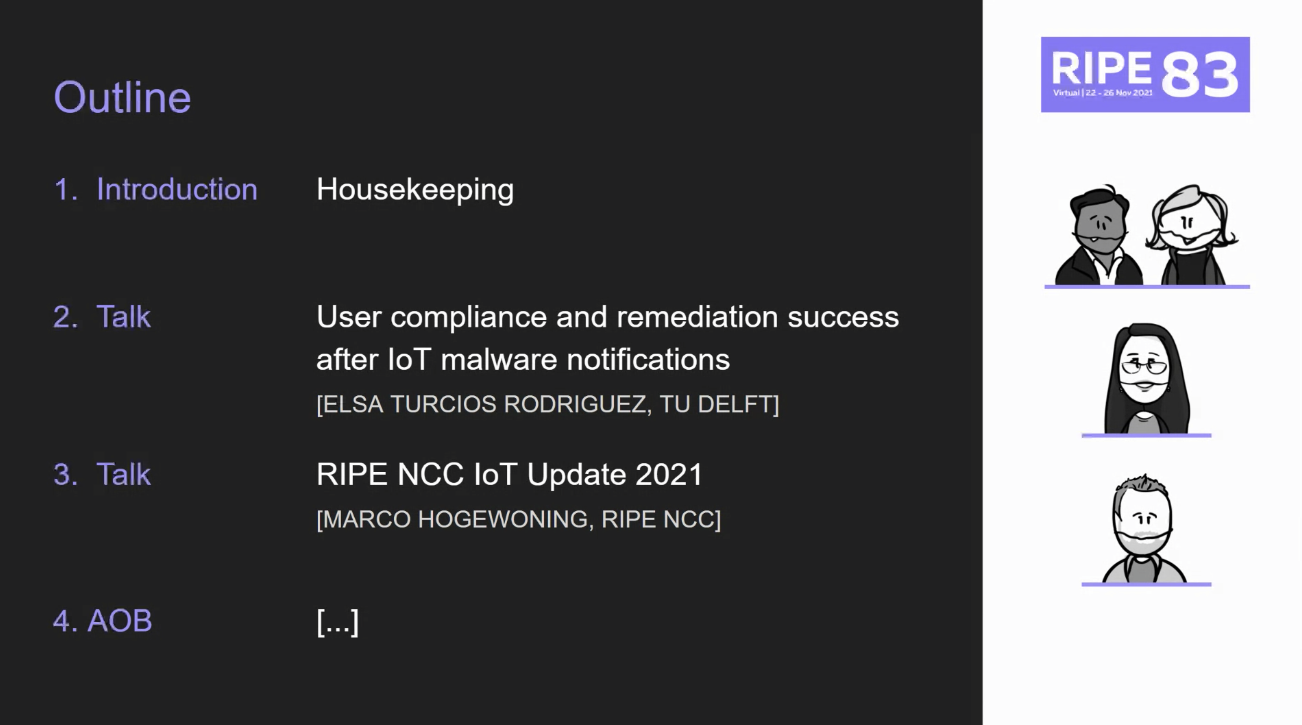 Wednesday was all about the RIPE Working Group (WG) sessions – here’s a summary:

The day ended with the General Meeting for RIPE NCC members. All the presentations and recordings are available online.
Tomorrow, we will start Day Four with the RIPE Community Plenary at 10:30 (UTC+1) – see you there! 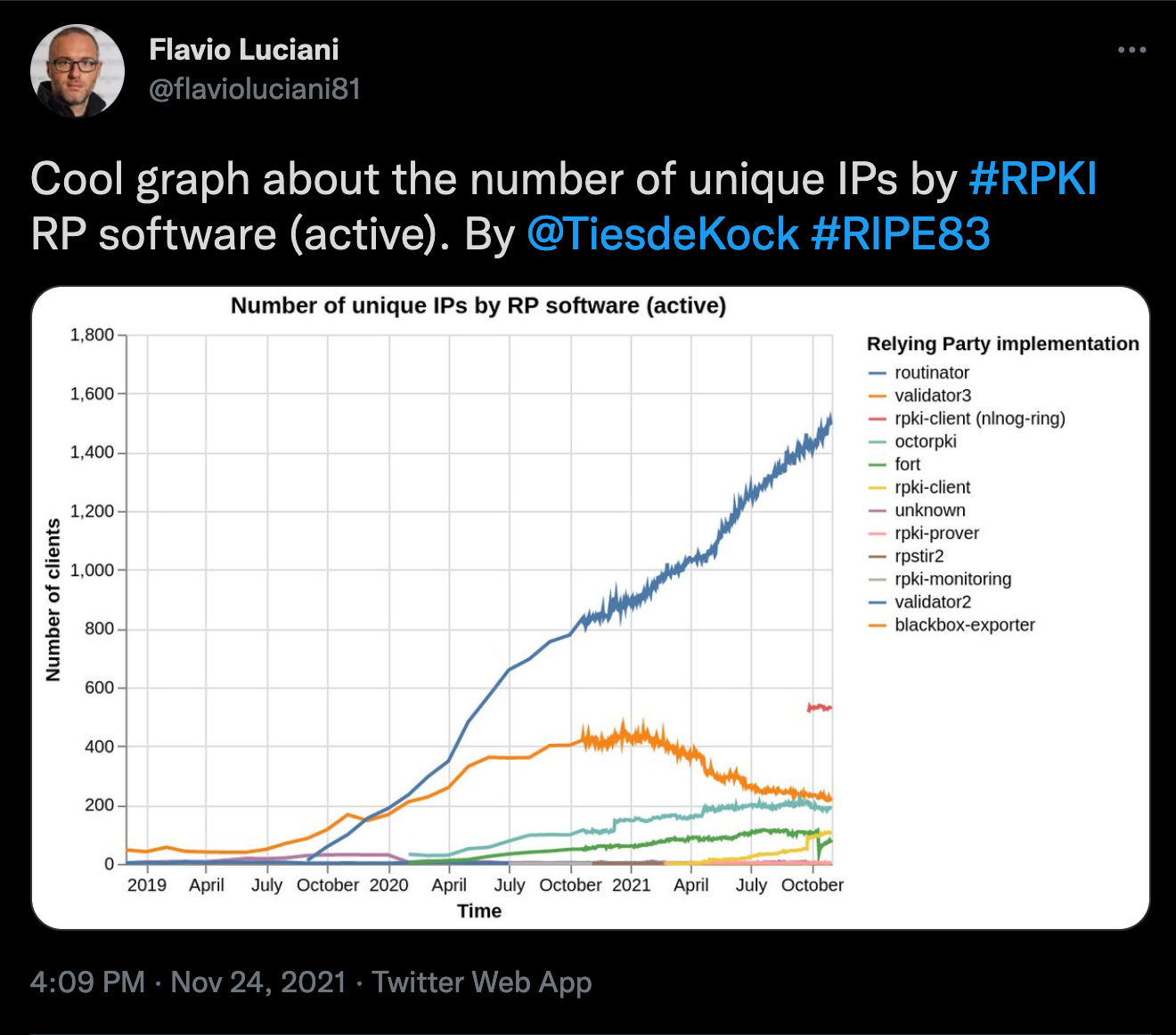 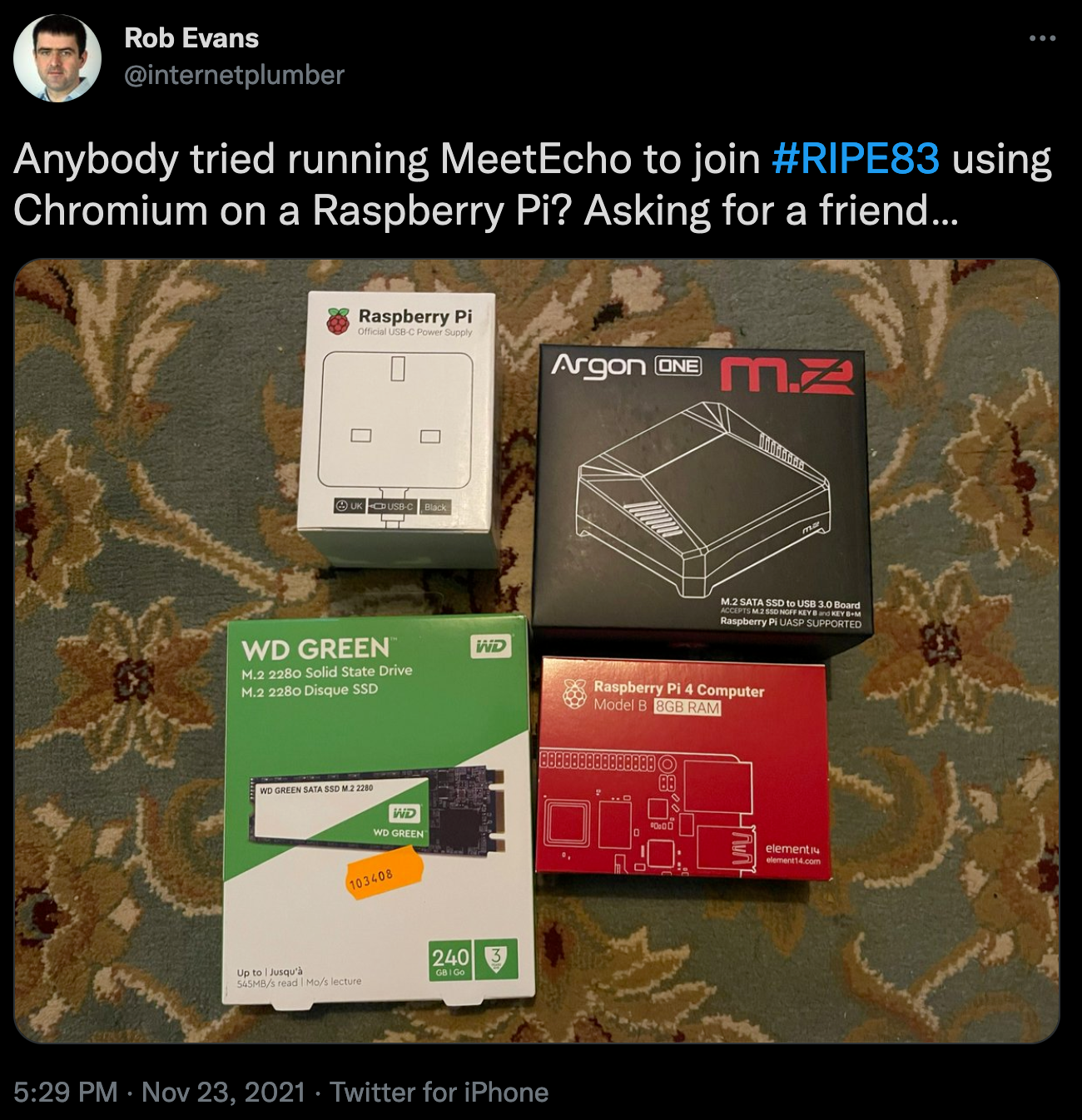 Thursday began with the Community Plenary and continued with a day of RIPE Working Group (WG) sessions. 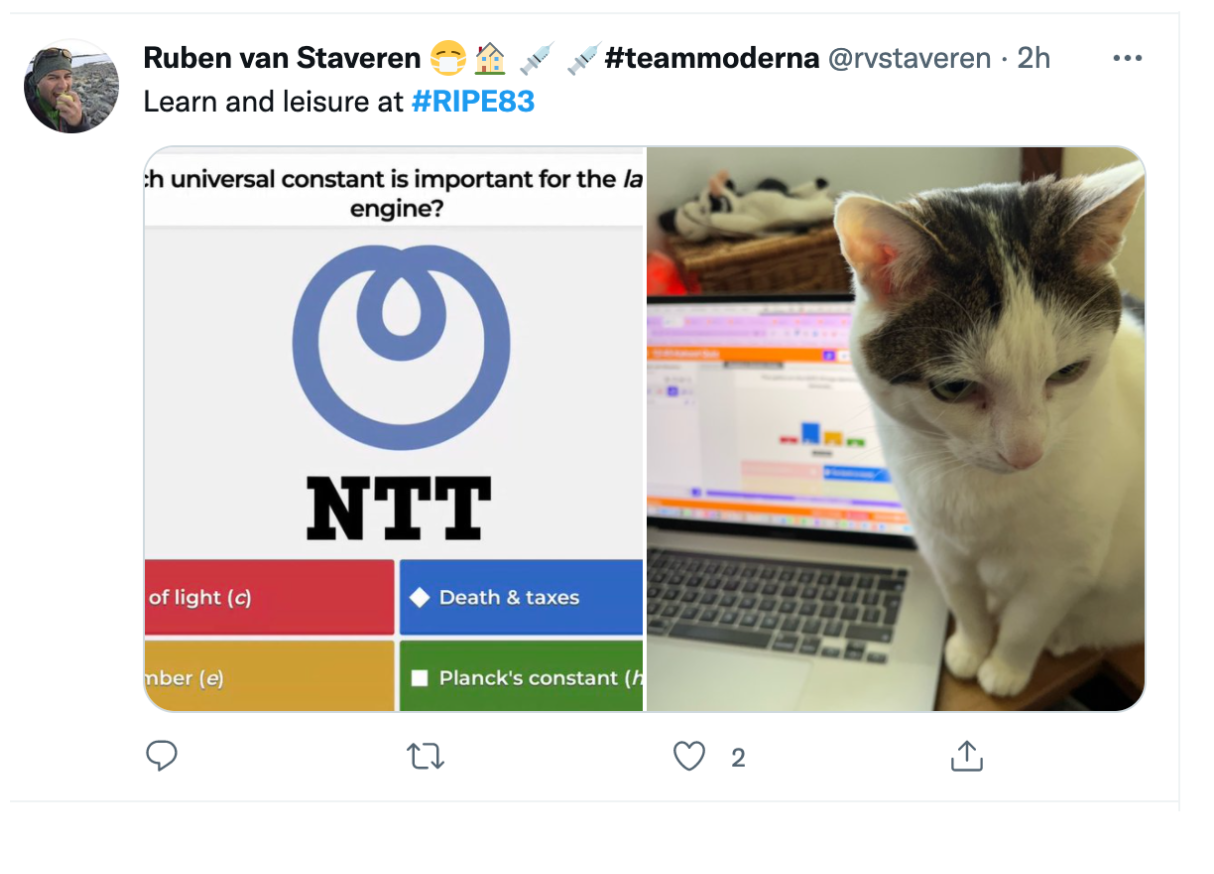 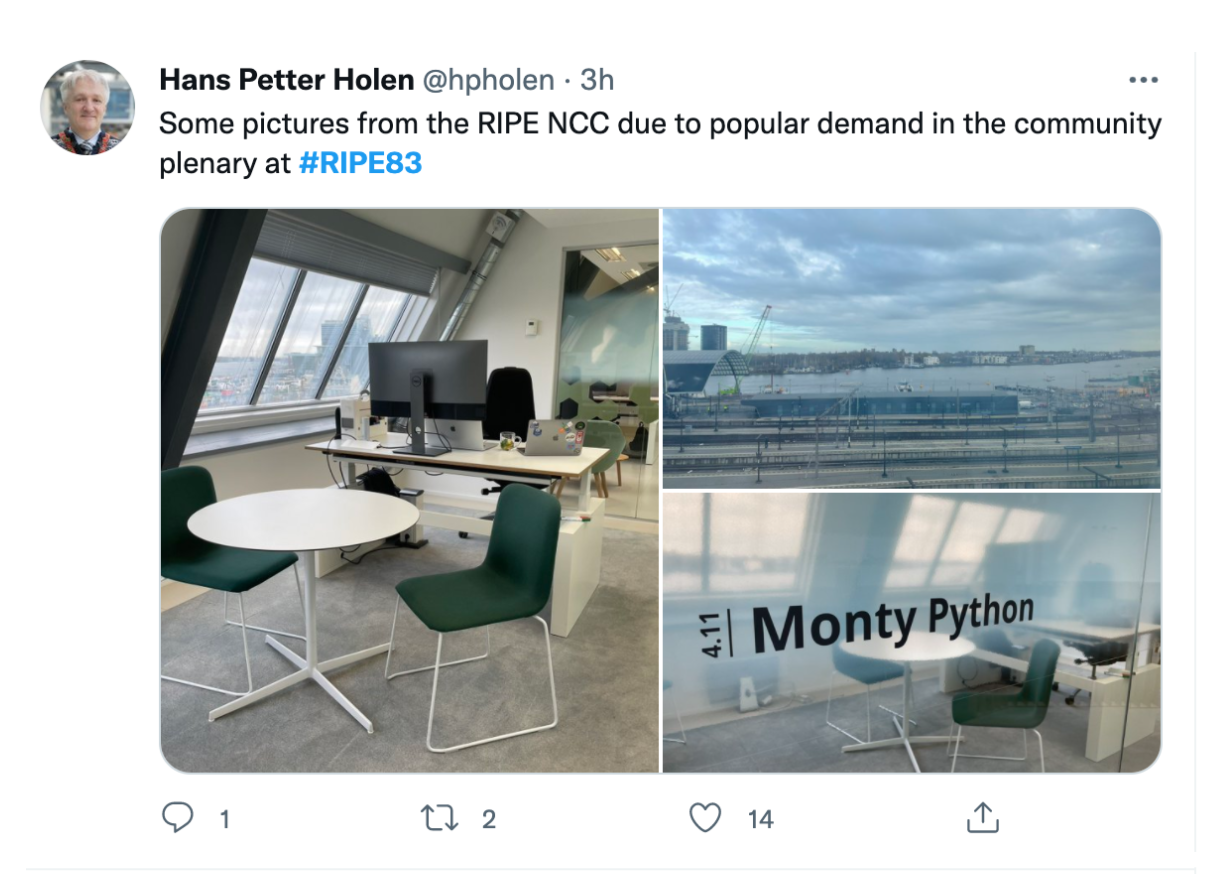 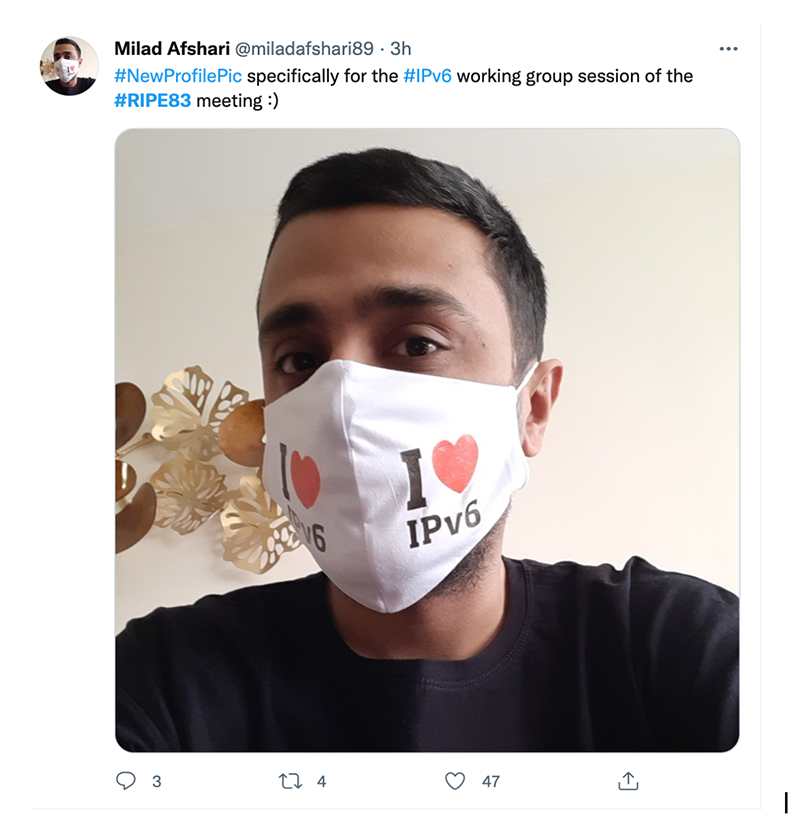 We wrapped up the week with the last plenary session and the closing plenary.

Brian Nisbet, RIPE Meeting Programme Committee Vice-Chair, announced that the two open spots of the Programme Committee would continue to be filled by existing members Dmitry Kohmanyuk and Alexander Azimov, and that there were no other candidates. He said he was happy to have them continue but hoped that more people would step forward next time in order to support the committee.

Perennial favourite Geoff Huston, APNIC, with an examination of the DNS’ “openness” according to various definitions. He argued that the Internet is all about the DNS these days and that a few massive companies have essentially taken over the DNS space, which no longer resembles the system as it was originally designed. His talk sparked a lot of questions about monopolies, the value of regulation and the future of the Internet.

Menno Schepers, RIPE NCC, presented the technical report from the meeting week and highlighted that the stenography stream is now IPv6-enabled, which means the RIPE Meeting website is now completely dual-stacked. How was your RIPE 83 experience? We want your feedback!

Brian thanked everyone for submitting their talks to the plenary and asked everyone to rate the talks they saw so that the RIPE Meeting Programme Committee can make future selections based on that feedback. He then closed the session expressing his hope that RIPE 84 would, finally, be a hybrid meeting.

RIPE Chair Mirjam Kühne closed the meeting by presenting some meeting statistics and changes in positions within the RIPE community. There were 1,126 registered participants in total, including 240 newcomers with an average of 450 participants per day.

Finally, Mirjam thanked the RIPE NCC staff, and especially RIPE 83’s event organiser Alexandra Vos, for all of their work to set-up the meeting when a mysterious group of individuals seized control of the stream… 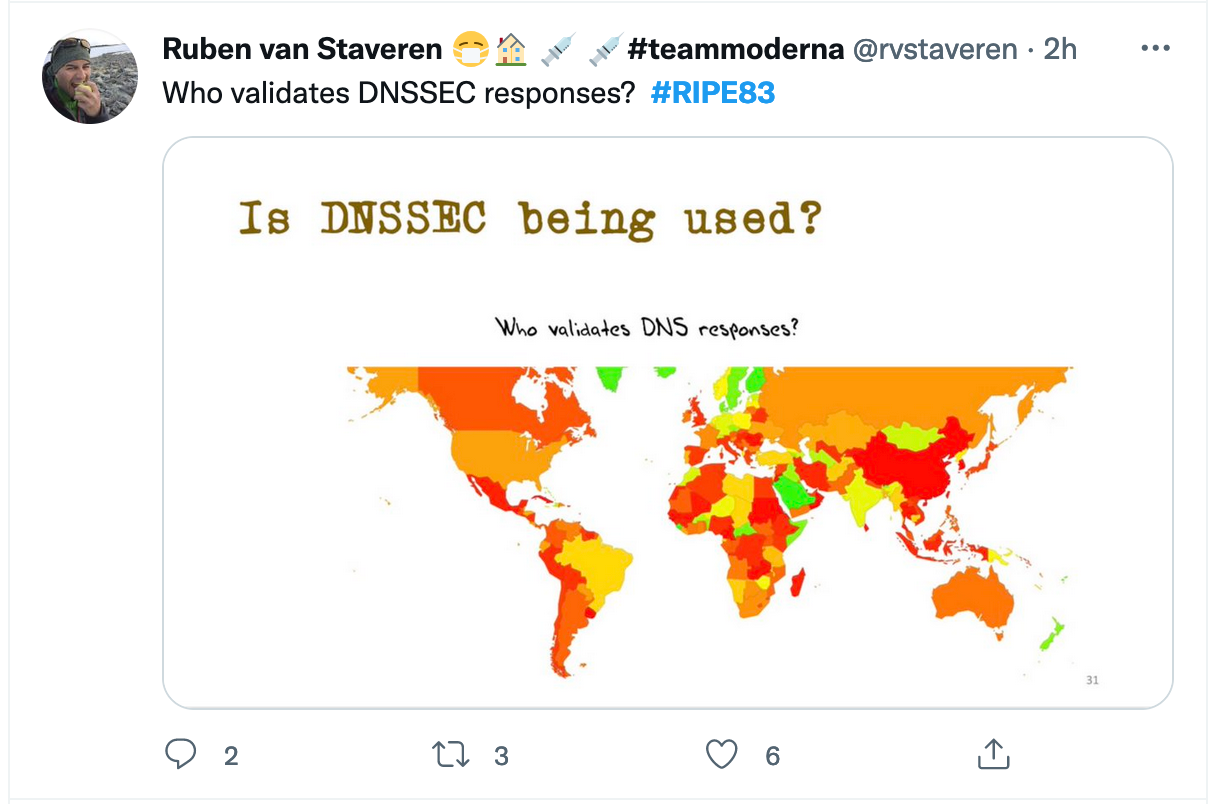 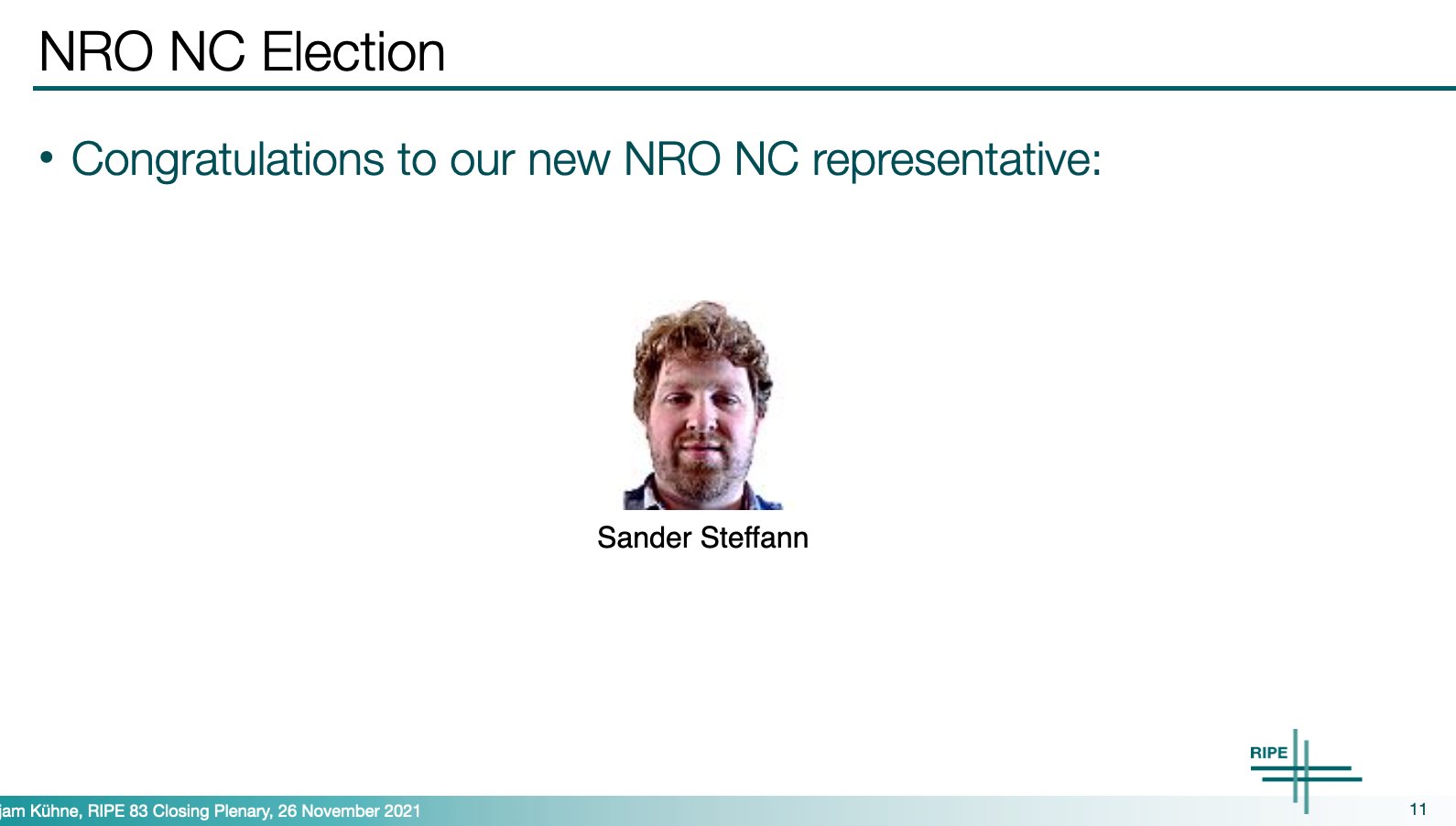